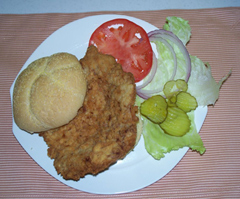 Ron Birkenholz is with the Iowa Pork Producers Association, which sponsors the contest.

“Any restaurant, cafe, tavern…you know, anyone who serves a breaded pork tenderloin is eligible to be nominated,” Birkenholz says.

“We encourage tenderloin lovers to get their nominations in on May 1st.” In addition to statewide publicity, the winner of the contest receives a plaque and $500.

“All the past winners have always told us they see a major influx of business,” Birkenholz says. “We’ve got people from all over the Midwest who follow this contest. We’ve had people from Illinois, Minnesota, and Missouri go to these restaurants that win to try (their pork tenderloin).”

Iowans who want to submit a nomination can do so online at www.IowaPork.org. Entries are due by June 11.

The winner of this year’s contest will be named in October, which is “Pork Month.” The winner of “Iowa’s Best Burger Contest” will be revealed Thursday.

That competition is sponsored by the Iowa Cattlemen’s Association and the Iowa Beef Industry Council.