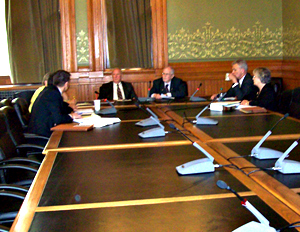 Members of the Senate Ethics Committee.

The Iowa Senate Ethics Committee has voted to launch an investigation of a Republican senator accused of asking to be paid and getting $7,500 a month to work on Michele Bachmann’s Iowa presidential campaign.

Senator Kent Sorenson of Milo denies the allegations and in a written statement Sorenson said his accusers are on a “witch-hunt.”

Senator Wally Horn, a Democrat from Cedar Rapids, suggested his vote to move forward with an investigation is about preserving the reputation of Iowa’s Caucuses.

“We’re first in the nation and we want Iowa politics as clean as it can possibly be,” Horn said, “don’t want any loopholes or anything. We want it clean and if we would drop this case right now, I would see that there’s doubt everywhere.”

Four of the six members of the Senate Ethics Committee voted to launch the investigation — Horn and two other Democrats voted for it, as did Republican Senator Sandy Greiner of Washington, Iowa.

“You know what? I hope that investigator comes back and says: ‘He’s as pure as the driven snow,'” Greiner said. “That’s what I want, but there’s going to be a cloud over this entire chamber if we don’t attempt to get to the bottom of this.”

Two Republicans on the Senate Ethics Committee voted against investigating their colleague. Senator Jack Whitver of Ankeny said the committee has set an “impossible standard” for the future and opened the door to “frivolous” ethics charges.

“I would assume we’re going to do the same thing which is right to an investigator,” Whitver said, snapping his fingers, “no matter what evidence is there.”

Senator Dick Dearden, a Democrat from Des Moines, said if these allegations against a Republican senator had come from Democrats, he would have been skeptical.

“These are reliable people within the Republican Party who are making these charges and I think that’s really the point with me, that these people are putting their reputations on the line,” Dearden said. “…No one I know would go out and make a false statement to try to hang another Democrat.”

Senator Jerry Behn of Boone — a former Republican leader in the Senate — said the allegations are based on hearsay rather than “paper” documents that indicate Sorenson was in the wrong.

“If we don’t have evidence that he did something, then I don’t think we should be pursuing this,” Behn said.

Sorenson submitted a written statement and other documents to the committee, but did not appear at today’s meeting. He submitted an affidavit from his attorney who said she had reviewed Sorenson’s Wells Fargo bank account and found no deposits of $7500 and no checks from the Colorado fundraising firm or the man alleged to have been paying Sorenson. Read all the documents here.

The chief justice of the Iowa Supreme Court will now appoint a special investigator to review the charges against Sorenson. Senate Ethics Rules forbid senators from being paid directly or indirectly by presidential campaigns. Sorenson was Bachmann’s Iowa campaign chairman for most of 2011. Five days before the Caucuses Sorenson quit and endorsed Ron Paul.