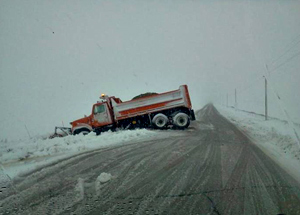 This snowplow got stuck. Photo courtesy of WHO-TV.

The spring snowstorm striking today is unusual even by Iowa standards.

Three cities have topped a 66-year-old record for the heaviest snowfall in the month of May. Kurt Kotenberg is a meteorologist with the National Weather Service.

“Britt and Forest City both reported 11 inches and Algona reported 10.5 inches of snow throughout the morning,” Kotenberg said. “Those numbers could go up a bit once they get the snowfall totals for the rest of tonight.”

Many Iowans who were told they could expect a “dusting” are now putting away the lawn mower and breaking out the snow blower. “This was a tough system to judge in that there was such a tight gradient between the rain, freezing rain, and snow…it was just kind of a matter of where it all went,” Kotenberg said.

“Then, this cold front really stalled out over central Iowa and it just kept snowing and snowing. It just didn’t really stop in some places.” A few more inches of snow are forecast overnight along a line from Creston to Des Moines to Waterloo, according to Kotenberg.

Warmer temperatures will arrive Friday with rain in the weekend forecast. “By Monday and Tuesday, we should be up into the 60s and 70s statewide,” Kotenberg said. “So, a lot of the snow is going to be melting pretty quickly.”

The combination of today’s heavy snow and high winds have left thousands of Iowans without power. At 3 p.m., MidAmerican Energy reported nearly 1,300 customers were still without power in the Fort Dodge area. Justin Foss is a spokesperson for Alliant Energy.

“Right now, our biggest outages are in far northern Iowa and southern Minnesota, where about 2,000 people are affected,” Foss said. “A lot of these outages are individual outages at one person’s home.” Foss notes Iowans who lose electricity should always call their utility provider.

“A lot of times when the power goes out, someone in the neighborhood will call, but in storms like this, your service wire may be out and if you don’t call us, we’ll never know that,” Foss said. Iowa’s electric cooperatives had more than 2,000 customers without power as of mid-afternoon.