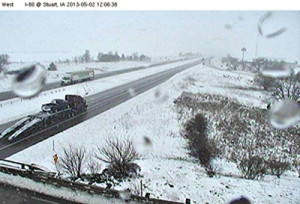 DOT camera view along I-80 near Stuart.

Travel is becoming iffy and many schools have canceled classes as 6 inches of snow is already on the ground in northwest Iowa, while central Iowa is bracing for 5-to-9 inches by tomorrow morning.

The Iowa Department of Transportation had turned off the winter road condition reports on its website  April 15th, but turned them back on today.

Go to to: www.511ia.org to find out travel conditions in your area.

Horticulturist John Fech says Iowans who still have the time better cover their plants, or they might be lost under the blanket of snow.

“For plants that are on the tender side or for people who’ve gotten adventurous and have put in plants that are really more suited for central or southern Missouri for example, those plants could be taken out by this batch of weather,” Fech says. This is already being called Iowa’s heaviest May snowstorm in more than four decades. He urges people to be careful in how they go about covering those plants they want to save.

“It’s a good idea to cover them with a bed sheet,” Fech says. “But first I’d put in a croquet hoop or a milk box or something along those lines to make sure the foliage isn’t crushed by the covering.” While much of Iowa saw high temperatures in the 80s earlier this week, lows dipping into the 20s and low 30s can be deadly for plenty of newly-potted plants.

“The biggest concern is for annual plants like geraniums and petunias and those kinds of plants you may have purchased, hanging baskets,” Fech says. “You really want to bring those into the garage and at least get an extra ten degrees on them.” Trees that are budding or flowering right now are vulnerable to frost but they should be okay, though Fech says some may suffer stunted growth.