You are here: Home / News / Iowa native makes a career out of improvising 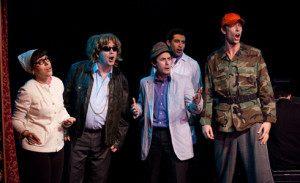 An Iowa native who left home at 17 for the stage lights of New York City is back in his home state for the next week, performing in a show coincidentally called, “Broadway’s Next Hit Musical.”

Robert Grant says it’s based on a fictional awards show and it’s all improvised, meaning, there is no script for the performers to follow.

“Audience members get the opportunity to write down, before the show begins, completely made-up song titles, songs that have never been heard before,” Grant says.

“It goes down on this piece of paper and goes into a fishbowl, our emcee comes out, introduces the four individual presenters who each come out, draw one of your titles from the fishbowl and create a scene and a song about that title.”

The spontaneous nature of the show can lead to some hysterical hyjinx, where in one scene Grant portrays a race car driver, followed by a hay-seed farmer, and minutes later, he’s a giant squid. Performing and touring with this show since 2005 has helped Grant get well past having fears of being in front of a large audience.

He has honed multiple skills as an actor, a singer, a dancer, a comedian and more. So, what does he call himself? “An improvisor,” Grant says, laughing. “I think that’s a good title and it’s a badge that I wear proudly. The chance to be able to do all of those things in one show and not have to learn anything ahead of time, it’s kind of a genius concept, really.”

Grant was born in Fort Dodge and grew up in Des Moines. And he grew –way– up. Between six-foot-seven and six-foot-eight, Grant says his height makes him unique. Part of the joy of performing is to be physical, he says, and he considers being so tall as a gift.

“My way into the improvisation, my way into the comedy, my way into the music is through my physicality,” Grant says. “I’ve got a lot of material here to work with and I certainly try to put it to good use. I feel really comfortable in my body and I think that has really helped me as a tall, lanky person.”

Tall trees have deep roots. Grant says performing here is a special treat as his parents will be coming to every single show while the troupe is in Iowa’s capitol city. “Broadway’s Next Hit Musical” runs through May 12th at the Temple Theatre in Des Moines.