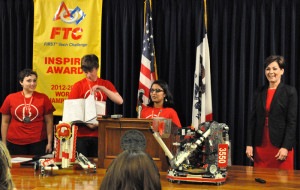 Lieutenant Governor Kim Reynolds honored the group of seven juniors from West Des Moines Valley High School this morning and the students gave a demonstration of their robot.

“That’s our future, folks,” Reynolds said to the reporters and staff who’d gathered in the governor’s office this morning for a news conference. “I just want to commend this team.”

Saketh Undurty said their robot was designed to pick up rings from a field that were placed in a vertical tick tack toe board.

“We have, as you see, a three-jointed arm to reach all three levels,” he explained.

The Valley High team was one of two Iowa teams to go to the world competition at the end of April, to compete against 128 other teams from around the world. Chase Schweitzer and two of the other high school juniors already have had paid internships where they’ve use the science, technology, engineering and math skills they learned from being part of the team.

“Sidd (Somayajula) and I work at a local web design company and we had no idea how to do it, but just because we had tackled so many problems in the first tech challenge we knew we could pull it off,” Schweitzer said,  “so we actually learned how to create websites while we were working there and now we’re actually working there, coding websites.”

State officials have been pushing to expand so-called “STEM” courses in high schools, to encourage students to learn science, technology, engineering and math skills. Schweitzer said Iowa has the highest concentration of high school robotics teams of any state in the country.

“The number of teams doubled last year and we’re becoming more and more impactful at the world championship,” Schweitzer said.

Daniel Miller, who wants to make a robot that can fly or jump, was asked by a reporter if it’s “cooler to be a geek” these days.

The Valley High helped start three other teams at their own high school in the past year. Their robot costs between $2000-3000. They have shared the prototype for a light-weight, $200 robot so teams in other countries could have a go at the technology.