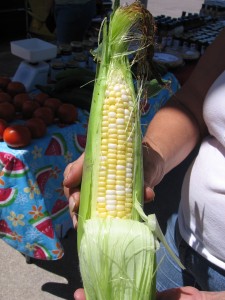 Monday’s U.S.D.A. crop report showed only eight-percent of the corn crop has been planted in Iowa, the slowest start to the planting season since 1995. The wet, cold weather has not only impacted the state’s major crop, but it is also hitting farmers who plant one of the state’s summer favorites — sweet corn.

Dean Rebal grows sweet corn on a farm in eastern Iowa between Solon and Iowa City. He says he just got his sweet corn into the ground, while last year he had it planted on the 28th of March.

Rebal likes to stagger the planting so he has sweet corn maturing throughout the season. The slow planting is causing trouble with the schedule.

“Usually I plant in every week to week and a half intervals…so I am gonna be cut a little short, I probably won’t get quite as many acres in as I normally do,” Rebal says. Last year’s early planting resulted in a longer season and more corn to sell.

“Last year we were right at 9,000 here, right on Highway one,” Rebal says. He is not expecting the sweet corn season to last as long this year.

“We’re going to be cut on this sweet corn season by, I would says two to three weeks,” according to Rebal. The means sweet corn lovers will have less time to enjoy the golden ears compared to last year.