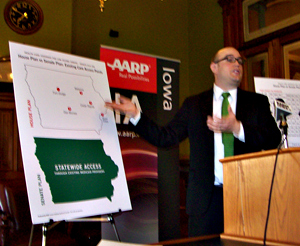 Three groups that have been lobbying for Iowa Democrats’ plan to expand Medicaid to cover up to 150,000 more uninsured Iowans are re-focusing their message.

The groups released a map today showing how much Iowans in each county will pay in property taxes to support the Republican alternative — Governor Terry Branstad’s Healthy Iowa Plan.

Linda Hinton, the government relations manager for the Iowa State Association of Counties, spoke during a statehouse news conference.

“Medicaid expansion will serve more Iowans than the governor’s plan and will not direct local property tax dollars away from their intended purpose,” she said.

The governor’s plan is financed with $85 million in local property taxes. Anthony Carroll, AARP’s Iowa associate state director, said AARP members are being shown another map which indicates only a handful of Iowa hospitals would qualify to provide the care — so uninsured Iowans in far southwest Iowa’s Fremont County, for example, would have to go to Des Moines to visit a doctor under the governor’s plan.

“Really now it’s about showing the differences to people who aren’t maybe directly impacted by low income Iowans. They don’t have a family or a friend member (who is uninsured) and when you talk about especially your local dollars being used for something that may not provide local coverage, that’s a sharp difference,” Carroll said. “That’s what’s new here.” 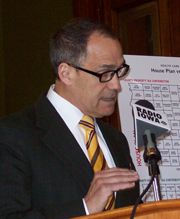 He says a major flaw in the governor’s plan is that only a handful of health care systems that win a special “accountable care organization” designation will provide the care to Iowans enrolled in the “Healthy Iowa Plan.”

The governor has repeatedly said Iowa can’t rely on the federal government and has to devise its own plan for covering the uninsured. Branstad’s plan, unlike Medicaid expansion, would be financed with a combination of 42 percent state resources and 58 percent federal funding.

Democrats say the federal government will provide all of the money for Medicaid expansion for the first three years and 90 percent after that. Branstad argues Medicaid doesn’t require “healthy choices” while his plan does.