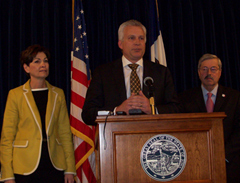 Bill Fehrman, the company’s president and CEO, said MidAmerican customers in Iowa should see a one-percent reduction in their utility bills once those turbines are up and running.

“As a result of this project, we’re actually able to reduce rates by $10 million by 2017,” Fehrman said during a news conference at the state capitol.

By starting the project later this year, MidAmerican will qualify for federal wind production tax credits that are set to expire December 31.

“Without that, the environment for doing projects of this magnitude and this size simply would not be possible,” Fehrman said.

Over the past several years MidAmerican has spent about $4 billion to install 1267 wind turbines around the state. MidAmerican plans to add the new turbines along the wind “ridges” in Iowa.

“In 2016, when the fleet is built out, you could do the calculation and about 39 percent of the energy that our customers would use could be supplied by wind,” Fehrman said.

The project should be complete by the middle of 2015.

“The actual sites are still under development, but generally if you look at a good wind map, you can probably get a good feel for where we’ll be targeting,” Fehrman said. “The ultimate decision on that will be done over the next couple of months.”

There are no state or local tax breaks being offered for this project. Fehrman said the federal wind production tax credit is “critical” to the survival of the industry.

“Now there’s a lot of efforts within the industry to continue to make themselves more competitive and we certainly support all of that as we go forward, but the work that our federal delegation did to extend it at least through this year was fundamental to our decision to bring these benefits back for our customers,” Fehrman said.

Iowa’s governor invited the MidAmerican executive to make the announcement in a news conference staged in the governor’s statehouse office late this afternoon..

“(MidAmerican) Energy has the new record: $1.9 billion investment in Iowa,” Branstad said, “the largest capital investment in our state’s history.”

“The closer you live to where wind is produced, the more supportive you are of this industry,” Branstad said.

A MidAmerican news release indicated landowner payments would top $3 million a year, but MidAmerican’s president would not comment on what an individual farmer might expect to be paid for leasing his land for one of these new wind turbines.

“Many of these high-tech companies, they want to have a ‘green’ portfolio,” Branstad told reporters. “They want to say that a lot of their energy for these data centers comes from renewable sources and we can offer that right here in Iowa.”

MidAmerican executives estimate 460 construction workers will be hired to put up the new turbines. MidAmerican will put 48 workers on its full-time payroll to operate and maintain the turbines.