You are here: Home / Education / Two Iowa libraries recognized at the White House 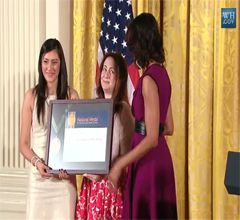 Representatives from the Marshalltown Public Library and the National Czech & Slovak Museum & Library were at the White House today to receive the 2013 National Medal for Museum and Library Service.

First Lady Michelle Obama hosted the event along with the director of the Institute of Museum and Library Services.

The Marshalltown library was cited for it’s outreach that has helped the diverse population adapt to living in Iowa. The Czech & Slovak Museum in Cedar Rapids was recognized for its role in helping the community recover from the 2008 flooding.

The two Iowa facilities were among 10 presented the honor by Mrs. Obama.

“I hope we all leave here inspired and rededicated, because as we can see from the stories that we have heard that your work is really powerful, and it is impactful and it can change lives,” Obama says.

“You do it quietly, you do it without a lot of fanfare, you don’t require a lot of attention.” Obama encouraged the library representatives to keep reaching out to their communities.

“Hopefully today gives you that little bit of light you need to just keep going, because this country needs you. We need the work that you do. It’s just our hope that every community in this country can have the resources that your are providing to our communities, that should be our goal,” Obama says.

Marshalltown Library director, Sarah Rosenblum, spoke with Radio Iowa via cellphone shortly after the ceremony. “It’s just been overwhelming, it’s such a great honor for our community and our library. The fact that we are sitting here in a reception room off the east wing is pretty unbelievable,” Rosenblum said with a laugh.

Rosenblum said they were shocked when they learned they would win the medal. “We’re just so excited about the recognition of the programs and the work that we do, so it’s really gratifying. You know, we are the smallest library that won this year. So, that’s exciting for us to get that recognition,” according to Rosenblum.

Each of the winning institutions was asked to bring someone along with them who had been impacted by their work. For Marshalltown that was Veronica Guevara, a Mexican-American who started going to the library in first grade to improve her English. Guevara is now preparing to graduate from the University of Iowa in December with a degree in political science.

She was awed by the surroundings of the White House. “I’m so speechless, I actually just had somebody come up to me and say ‘why are you just sitting here?.’ My response was I was just letting it sink in, it’s surreal, it’s such an honor, it’s just amazing. The library really deserves this award,” Guevara told Radio Iowa.

She said her story is one of many that can be told in Marshalltown. “I know I’m not the only person who has been very impacted by the library and their resources and the people and the staff,” Guevera said. “I’m just very happy for the library and I’m just so honored that they considered my story,”Guevera says.

Gail Naughton, the president of the National Czech & Slovak Museum & Library was at the White House representing the Cedar Rapids facility.