You are here: Home / Education / Education Department director won’t say if he went after job in Colorado (audio) 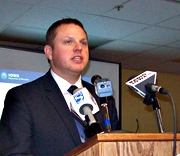 Iowa Department of Education director Jason Glass today confirmed he is a finalist for a job in a Colorado school district, but declined to say if it’s a job he sought.

“I can confirm that I am a finalist for a superintendency in Eagle County, Colorado. I am honored to be considered and given that the search is still ongoing, it is not appropriate for me to comment any further,” Glass said.

Glass was asked about the job during a break in today’s Board of Education’s meeting. He responded this way when asked if he sought the job or if Colorado officials sought him: “My wife and I have a longstanding history, tradition with the district, so we have connections there. So we are just honored to be considered.”

Glass was director of human resources for the Eagle County School District in Colorado where he would return as superintendent if he is selected for the job. When asked again if he sought out the job, Glass replied that the job search is still ongoing, so he could not comment any further.

The governor introduced a series of education reforms, but the legislature has still not taken action on any of the major issues. Glass was asked if his departure would hurt the reform effort.

“We’re optimistic and hopeful the legislature will be able to reach a reasonable compromise and find a pathway forward where education reform can be successful for the state.”

Glass was asked if he is frustrated with the lack of action on education reform.

“I think the whole state is frustrated at the pace that this has happened, but I still hold out hope that we will be able to find a way through it,” Glass told reporters.

Glass said the Colorado district will conduct interviews next week and then move ahead with the selection process.

Glass was asked if he would seek other jobs if he did not get the position in Colorado.

“We’re happy in Iowa. My two children were born here in Des Moines. My wife is a teacher at the Des Moines Public School District,” Glass said. “We are happy here. This is just an opportunity that we felt we had to look into and, again, we are honored to be considered.”

Governor Branstad asked Glass to become Iowa’s education director in December of 2010. The Vail Colorado Daily newspaper reports Glass’s pay would rise to $175,000 a year if he gets the Colorado job. His salary as a state department director is currently $147,000.