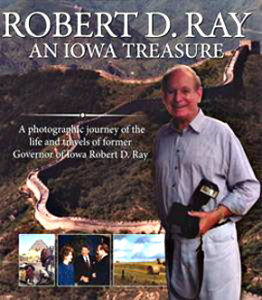 Former Iowa Governor Robert Ray is releasing a book today that chronicles his globe-trotting life in pictures — most of them photos he took himself.

Proceeds from the sale of the 160-page coffee table book will benefit Keep Iowa Beautiful, a foundation Ray co-founded and where Jerry Schnepf is executive director.

“All the roles that he played as everything from governor to attorney to father to an ambassadorial appointment to running corporations to being a mayor,” Schnepf says, “there’s not many people who have had that kind of a history.”

While the book is going on sale today, copies are also being sent to be included in the permanent collections of all 561 public libraries and branches in Iowa.

Schnepf explains why they took that step. “The reason is the uniqueness of the individual and the special nature that he is,” Schnepf says.

“It’s important that people see images and see how he viewed things. For a youngster, that can be pretty impressive. It can lead people to think differently. 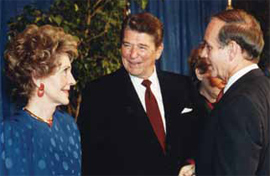 The title of the book is, ‘Robert D. Ray: An Iowa Treasure.’ We want to make sure this treasure is available to every Iowan.”

The colorful pictures include snapshots of Egyptian pyramids and the Great Wall of China, alongside lush landscapes of Iowa farmland and the Iowa Governor’s Mansion, Terrace Hill.

The 84-year-old Ray served as Iowa’s governor from 1969 through 1983, in addition to stints as president of Drake University, mayor of Des Moines, a Corporate CEO and as a humanitarian.

Schnepf says the pictures in the book cover Ray’s entire professional career, dating from the 1950s to shots Ray took just in the past year.

“It covers a wide range of his history, photos that he took but also photographs that people took of him,” Schnepf says, “so it’s two ways, how he saw the world and sometimes, how the world saw him.”

The book will be available for sale through the website: www.keepiowabeautiful.com