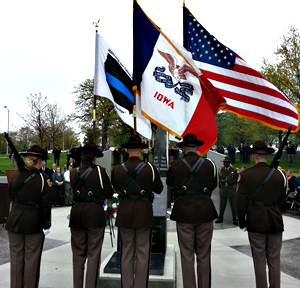 Three Iowa law officers who died in the line of duty had their names added to a monument during a ceremony this morning outside the state capitol in Des Moines.

Relatives of the three men were on hand for the ceremony and were presented with purple hearts from Governor Branstad and Lieutenant Governor Kim Reynolds.

“It is with a heavy heart that we reflect on the loss of such dedicated individuals. But, we also know their sacrifices were not in vain,” Reynolds said.

Iowa State Patrol Colonel Dave Garrison spoke about the officers whose names were added to the Iowa Peace Officers Memorial.

That includes Stuart Police Chief Robert Smith, who suffered a neck injury while arresting a suspect in 2009. “The 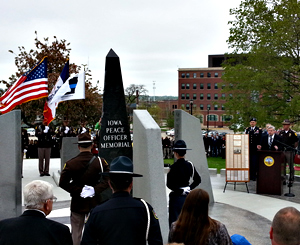 injuries to his neck required surgical intervention. Complications arose during the surgery and Chief Smith was left paralyzed,” Garrison said.

“Chief Smith died from complications of the paralysis on August 13, 2010.” Another honoree, Motor Vehicle Enforcement officer Philip Adams, lost his life while on the job in March 1973.

Adams was struck by a car while attempting to flag down a semi driver.

The final honoree, Floyd County Deputy Levi Bowers, died in February 1916 after exchanging gunfire with a suspect in the town of Rockford.

In the last 140 years, 169 Iowa law enforcement officers have died in the line of duty. 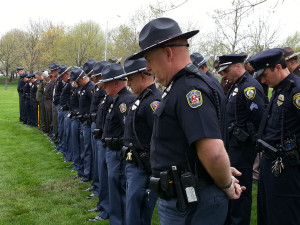