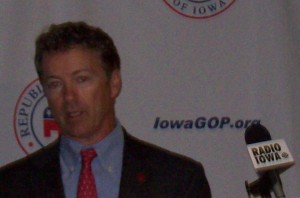 The Kentucky Senator who won his race in 2010 with the support of Tea Party activists is speaking tonight at an Iowa GOP fundraising banquet.

During an afternoon news conference in Cedar Rapids, Iowa, Senator Rand Paul told reporters he is “offended” by today’s IRS admission. The agency announced tax documents from tea party groups had been flagged for additional review during the 2012 campaign and IRS officials offered an apology.

“I’m offended when any kind of government entity targets people for their political or religious beliefs,” Paul said, “so it’s, you know, particularly offensive, since I’m one of the groups they were targeting. They didn’t audit me personally, but, you know, government should never be used to bully people.”

IRS officials say the Tea Party investigations were instigated by low-level staff in Ohio and the agency’s top management in Washington were not involved. Paul said he doesn’t know the details yet to determine if that’s where it ends, or whether congress should launch an investigation.

“I haven’t seen the investigation or the report, but I would think that you would go until you can’t go beyond a level, to find out where the orders came from,” Paul told reporters.

Earlier today White House spokesman Jay Carney said the Obama Administration expects an internal IRS Inspector General investigation “to be thorough and for corrections to be made.”

Senator Paul spoke with reporters for more than half an hour, answering questions about his presidential ambitions and his appeal to those who supported his father’s bids for the White House.  Paul also described himself as “the bridge between the House and Senate” in the current immigration reform debate.

Paul said he’ll make a decison next year about running for the White House.

“I don’t feel a time constraint, necessarily,” Paul told reporters. “We’ve said that it’ll be at least 2014, sometime, before I make a decision, but in all likelihood I will be on the ballot in Kentucky, so we haven’t really looked beyond that.”

Paul was elected to the U,.S,. Senate in 2010 and his term is up in 2016. He spent this afternoon in meetings with Evangelical pastors and Republican activists in the Cedar Rapids area before he spoke to more than 500 people at tonight’s GOP fundraiser. And Paul sent a warning shot to other Republicans who might consider skipping Iowa’s first-in-the-nation Caucuses.

“I tell ’em good luck, you know. I mean, I don’t think it works,” Paul said during his afternoon news conference. “…There’s a great deal of momentum that comes out of Iowa. The winner in Iowa becomes a contender. Even if they weren’t a contender going into it, if they win Iowa they automatically become a contender, because is buoys them going into New Hampshire and the other states.”

Paul conceded people are trying to compare his views with his father’s — former Texas Congressman Ron Paul, the three-time presidential candidate. But Rand Paul suggested being related to Ron Paul isn’t his entre to the White House.

“After a while, if it isn’t about what I stand for and if it’s always about a comparison, that means I’m not doing a very good job and I’m not going to be able to be a significant player on the national scene,” Paul told reporters.

During his speech this evening Paul argued Republicans could become the “dominant national party” if Republicans allow people who don’t agree on every issue into the GOP tent. He also repeated his criticism of former Secretary of State Hillary Clinton, accusing her of “dereliction of duty” for failing to shore up security at the statement department mission in Benghazi, Libya that was attacked last September 11th.

(This story was updated at 8:30 p.m. with additional information.)