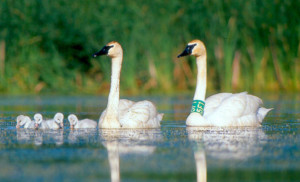 An effort launched 20 years ago to restore the trumpeter swan population in Iowa received another boost this week.

Dave Hoffman is a wildlife technician with the Iowa Department of Natural Resources in Clear Lake. He says nearly all of the swans introduced in the state have been placed in northern or east-central Iowa.

But, 14 trumpeter swans were released this Wednesday and Thursday in four locations in southwest Iowa. The young birds at Walnut Creek Lake in Mount. Ayr, Summit Lake near Creston, Viking Lake near Stanton, and at Lake Anita State Park will remain at those locations until the lakes freeze next fall.

“Our goal is that they learn to fly at these locations and then return next spring,” Hoffman says. “It will be several years before there’s any nesting. Typically, it takes at least four years before a female can even reach the reproductive age.”

It’s been a big challenge to restore the trumpeter swan population in Iowa as the birds have a high mortality rate. Hoffman says they’ve released over 1,100 young trumpeters in the state since the campaign was launched in 1993. There are now just 47 pairs nesting.

Trumpeter swans are the largest waterfowl in North America. They can weigh up to 32 pounds and have an eight foot wingspan. The trumpeters vanished from Iowa in the late 1880s as they were hunted by early settlers.