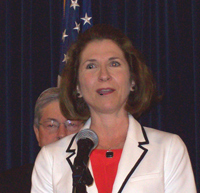 A woman from rural Ames who is a certified public accountant was sworn in this morning as Iowa’s new state auditor.

“I am honored by the governor’s appointment decision and I want to thank him for his confidence and for his leadership and I look forward every day to working the best that I can to not only validate the governor’s decision, but also to earn the same type of confidence from the people of Iowa,” Mosiman said during a statehouse news conference. “I will do my very best every day.”

Mosiman served as Story County’s Auditor for 10 years, running local elections, and she’s been working as a top deputy in the Iowa Secretary of State’s office since 2011. She intends to run for the job of State Auditor when the current term expires in 2014.

“I think it’s very important to have consistency in this office,” Mosiman said. “I have been elected three times. I am looking forward to a statewide campaign.”

On the day Vaudt announced his resignation Branstad said his goals were to choose a CPA who would run to keep the job in 2014, and Branstad made it clear he was looking for a woman. The governor this morning said he’s excited to have a role in elevating the first woman to serve as the state auditor. Branstad said he made it clear to Mosiman she is to sound the alarm if things are going wrong in state government. 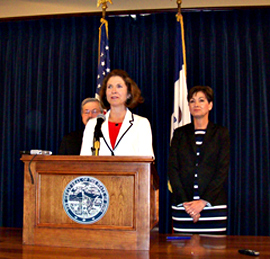 “None of us like to get bad news,” Branstad said, “but I would much rather get it early when we can still make some changes and prevent making a mistake.”

Mosiman said her “top priority” is to be an “independent voice.”

“I assume there will be differences of opinion and they will just have to be addressed,” she said, “because it doesn’t go along the lines of politics when it comes to the financial matters of the state.”

Former State Auditor David Vaudt announced in early April that he was resigning to become chair of the national Governmental Accounting Standards Board.

His last day as State Auditor was May 3. Mosiman, who started her job today, said Vaudt “will be a hard act to follow.”

AUDIO of governor’s weekly news conference, at which Mosiman appointment was announced, runs 25:17