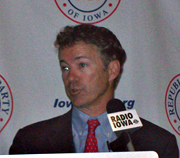 Over 500 Iowa Republicans in Cedar Rapids this weekend gave a strong indication they’re closely watching developments about Benghazi and how it might impact the presidential campaign of a prominent Democrat.

A congressional hearing last week focused new attention on the September 11, 2012 terrorist attack on the U.S. mission in Benghazi that led to the deaths of four Americans, including the U.S. Ambassador to Libya. Kentucky Senator Rand Paul — the keynote speaker at the Iowa GOP’s Lincoln Dinner in Cedar Rapids Friday night, suggested former Secretary of State Hillary Clinton should be held accountable.

“First question for Hillary Clinton: where in the hell were the Marines?” Paul said, earning cheers from the partisan crowd.

Paul faulted Clinton for failing to shore up security at the Benghazi outpost.

“There’s no excuse, in the six months leading up to this, when your people on the ground — military people and state department people — are asking for more help and they got nothing,” Paul said. “It was inexcusable. It was a dereliction of duty and it should preclude her from holding higher office.”

The Republicans gave Paul a standing ovation for that declaration. Senator Chuck Grassley gave a shorter speech to the same crowd and it was this single reference to Benghazi that got the loudest response: “It’s our time to keep our military strong and to hold this administration responsible for Benghazi.”

Rand Paul is considering a bid for the White House in 2016 and his weekend trip to Iowa will be followed by trips to other states which hold early voting in the presidential campaign. Hillary Clinton has not been to Iowa since the evening of her second-place finish in the 2008 Iowa Caucuses. Her husband — former President Bill Clinton — campaigned in Iowa in 2012 for Democratic congressional candidate Christie Vilsack and for President Obama’s reelection campaign.