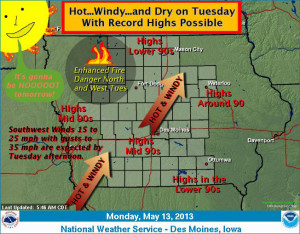 Records are expected to fall across the state tomorrow as a burst of hot air moves into Iowa.

“We’re looking for highs to reach the upper 80s in the east to the mid 90s in western Iowa, so definitely a big change for us,” Skow says.

The coming heat wave won’t last long. Skow says a cold front should push through later on Tuesday and drop temperatures back into the 70s and upper 80s on Wednesday.

The potential for record highs on Tuesday follows Sunday morning’s near record lows. In fact, Ottumwa posted a new record low on Sunday by hitting 34. Several cities in central and northern Iowa came within a few degrees of breaking record lows on Sunday.

Much of the state has experienced a break from the unusually wet spring, but rain will be returning soon. “The chances are pretty low for rain starting Tuesday night, but they’ll gradually increase throughout the latter half of the week,” Skow says.

“Saturday looks to be the best chance for any widespread, heavy rain.” The National Weather Service warns there’s an increased “fire danger” over sections of northern and western Iowa Tuesday because of temperatures in the 90s combined with low humidity and brisk winds of 15 to 25 miles per hour.