You are here: Home / News / State on pace to set a record for lack of tornadoes 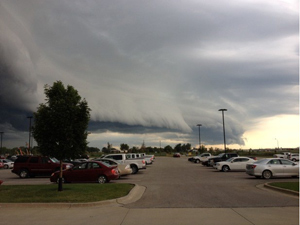 There have been a few watches, but no tornadoes have touched down in Iowa this year. In fact, it’s been almost a full year since Iowa’s seen a twister.

Meteorologist Jeff Johnson, at the National Weather Service, says the state’s about to set a new record for longest period of time for being tornado-free.

“We never thought we’d even come close to breaking this record,” Johnson says.

“The last tornado in Iowa was back on May 24, 2012 in Fayette County and in the central part of the state, you have to go all the way back to early May of last year, May 4th, there was one up in Winnebago County, so it’s been a long time since we’ve had a tornado in this area.”

In more than 60 years of keeping records on tornadoes in Iowa, he says there’s never before been a twister-free run this long.

Johnson says, “Tornado records go back to 1950 that are somewhat categorical and anything beyond 1980 would be much more accurate, but in that time period since 1950, if we get through Tuesday, it would be the longest stretch without a tornado in the state.”

There are two primary reasons why we have not been inundated with tornado warnings in the state for so many months. “First of all, last year we had the drought and that minimized the number of thunderstorms as well as severe weather,” Johnson says.

“This year, it hasn’t been the drought, in fact, we’ve been wet. It’s been the fact we’ve been under a very cool and wet spring which has not been conducive to storms which are capable of producing tornadoes either.” He warns, more than half of the typical year’s worth of tornadoes that hit Iowa appear in May and June.

By this date, in a normal year, the state would have already recorded 12 twisters.