You are here: Home / News / ISU researchers test concrete for use in wind turbine towers 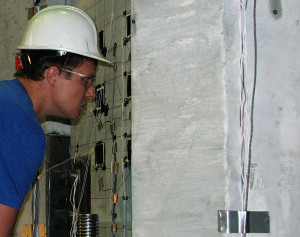 As more and more wind turbines pop up across the state and country, researchers at Iowa State University are studying a new way to build the towers that hold them up into the sky.

Grant Schmitz, a graduate student in the College of Engineering, says they’ve been testing the use of pre-cast hexagon-shaped concrete panels as the industry moves toward taller towers.

He says one of the first advantages is cutting the need to truck the giant steel columns now used for the towers along highways.

“They’re are very large and very long and going to a higher hub height, these sections would even need to be larger, which really is not permitted by transportation limitations ,”Schmitz says.

“The main advantage with the precast concrete tower design that we came up with was the transportation benefits. We can break this into smaller pieces that we can transport using standard flatbed shipping without the need for any permitting.”

Schmitz says the steel towers now come from all over the U.S. and some come from out of the country. The concrete towers could be built locally.

“I think you can basically find a pre-cast plant within 200 miles of anywhere in the U.S. So, any pre-cast plant could essentially create these components and be much closer to the wind farm sites than some of these steel manufacturers,” Schmitz says.

They are studying an increase in tower heights by 20-meters — or roughly 60 feet– to make a tower that is around 320-some feet tall. Schmitz says taller towers have a better chance of catching the prairie winds. 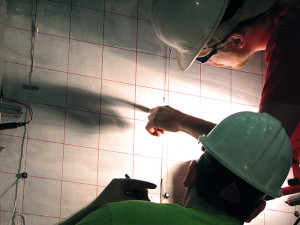 “Based on a number of studies, we’ve kind of come up a rough number of about 15-percent as a minimum for an increase in energy production,” Schmitz explains.

“And that basically comes from the higher wind speeds that you get at a higher elevations, and a more sustainable wind. So, you’re producing energy more consistently at those higher elevations.”

Schmitz and the others in the civil, construction and environmental engineering department have been testing the strength of the concrete panels. He believes the concrete would last longer than the steel towers.

“Right now steel towers are currently limited by the fatigue life of the tower to about 20 years. And concrete generally has a better fatigue performance,” Schmitz says.

“Based on the high-strength materials that we’re using, we actually need to do a little more analysis in terms of what kind of fatigue life we’re looking at for high-strength concrete. But our hope and our thoughts are the fatigue life would be longer than what you’d get out of a steel tower, so instead of a 20-year service life, we could be looking at 25 or 30-year service life.”

Schmitz says they also have to some more study on the cost to put up the concrete towers when compared with the steel. Schmitz worked with Sri Sritharan on the concrete tower design that has 6 hexagon panels connected to 6 columns. He says if all the additional testing pans out, they could be ready to start using the new towers in a couple of years.

The project has been supported, in part with a $109,000 grant from the state Grow Iowa Values Fund.

There are three industry supporters of the project: California-based Clipper Windpower, which has a turbine design and manufacturing facility in Cedar Rapids; Lafarge North America Incorporated of Calgary, Alberta, Canada; and Coreslab Structures Incorporated of Bellevue, Nebraska.