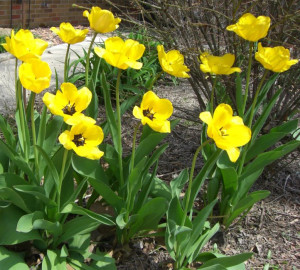 While Iowa has already felt the extremes of winter and summer in the past two weeks, a springtime ritual — the Orange City Tulip Festival –opens today.

It’s the northwest Iowa town’s 73rd annual fest and spokeswoman Rachel Meekma says there will be many thousands of colorful, fragrant flowers to admire.

“The tulips naturally are behind schedule because of the late spring we’ve had but this weather we’ve had this week has really made some big strides and they’re starting to pop open,” Meekma says.

In addition to the planted flowers outside, there’s also the big flower show in the Sioux County Historical Society Museum, featuring more than a thousand tulips.

Besides the flowers, Meekma says there are two parades each day and many other things to see and do. “When visitors come to Orange City, we can keep them busy from 9 o’clock in the morning until 11 o’clock at night,” she says.

“They can do all of the things that open up early, like the Dutch Dozen and they do three performances each day. We have the trolleys giving tours and they start at 9 o’clock in the morning.” She also touts the Straatfest, which begins at 1 P.M. daily.

“Many people don’t realize we have that hour-long pre-parade festival that starts at 1 PM,” Meekma says. “It includes all of our dancers, our queen and court is presented, so that’s a must-see.” There’s also street scrubbing at 2 P.M. and the parades at 2:50 and at 6:30 P.M.

This year’s night show is “Fiddler on the Roof,” being performed at City Hall. More than 100,000 visitors are expected to attend the 3-day festival.