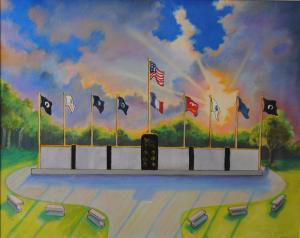 Singers and musicians from across Iowa will perform 150 years of songs at a benefit concert this weekend to help fund a project honoring American veterans of all wars.

Johnny Audette is organizing “Songs for Soldiers: A 21-Song Salute,” which goes on stage in downtown Des Moines tomorrow night.

“The music of Songs for Soldiers will be a walk through military music, starting from the Civil War and working up towards the current day,” Audette says.

“Some of the musicians will be performing instrumentally and we have some vocalists and singer-songwriters that have come in.”

All proceeds from the one-night-only show are to finance a proposed $200,000 veterans monument at the Des Moines Masonic Cemetery, where Audette is general manager. Engraved paver bricks bearing veterans’ names and messages from loved ones are being sold as an additional fundraiser to offset the cost of the memorial.

“The Armed Forces Wall of Honor will have an 8-foot by 90-foot Walk of Honor which leads up to it,” Audette says. “That’s where the granite pavers from sponsors will go, in the walkway leading up the wall. The wall will be several panels wide. It’s a three-phase project.”

He says it’ll be a place to remember, reflect and recover, honoring all veterans, regardless of their branch of service, location or current status. The concert begins at 7 P.M. Saturday at the Scottish Rite Consistory in Des Moines.