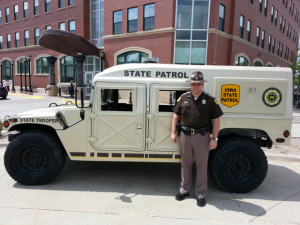 The Iowa Department of Public Safety has added eight military style vehicles to its fleet.

The eight Humvees were acquired through a program which allows a transfer of military equipment to law enforcement agencies at no cost to the agency.

When the Iowa DPS is done using the Humvees, they’ll be returned to the military. Lieutenant Robert Hansen says the Humvees are still being outfitted.

“In addition to that, there’s some minor maintenance and then painting so they match our fleet.” The State Patrol Division will use the Humvees during blizzards, flooding, tornadoes, and other disasters.

Hansen says the division’s Safety Education Unit will also use the Humvees occasionally to promote traffic safety initiatives. The vehicles will be deployed throughout the summer around the state.