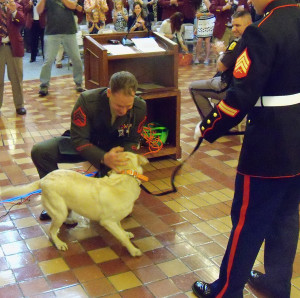 Sergeant Ross Gundlach was reunited with Casey in a surprise at the Iowa Capitol.

A Marine from Wisconsin was reunited with the bomb dog he served with in Afghanistan in a surprise ceremony today at the Iowa State Capitol.

Twenty-five-year-old Sergeant Ross Gundlach of Madison, Wisconsin thought he was visiting Des Moines to appear at a hearing where he would ask to be allowed to adopt Casey, a bomb detection dog who came to the Iowa Fire Marshal’s Office after serving in Afghanistan.

State officials asked Gundlach to attend what they said was a ceremony for Armed Forces Day in the capitol rotunda before his hearing.

The ceremony was a ruse, and State Fire Marshal Ray Reynolds called Gundlach forward and told the story of how he was trying to adopt Casey.

Reynolds then told Gundlach that they’d already taken care of the adoption and revealed another surprise — Marine Sergeant Kyle Williams — who served as Gundlach’s security officer.

“You know every time he and Casey were put in harm’s way, he could usually turn around and within 10 feet he’d see his sergeant, Sergeant Williams. So, what we’d like to do is maybe have Sergeant Williams reacquaint you with Casey,”Reynolds said. Williams brought Casey in and the dog and Gundlach spent several minutes together as the crowed looked on.

Gundlach talked about the surprise after the ceremony. “It was a total surprise, I came here planning to plead my case,” Gundlach says. He says Fire Marshal Reynolds kept saying it was an “if situation” you get your dog so he had no idea. And then Sergeant Williams came out. “It was pretty overwhelming, I don’t think I deserve all this attention,” Gundlach said.

Gundlach says it was very tough when Casey left. “It’s a little rough, it’s a little rough losing your dog a after spending 24-hours a day with her. But like I said, about midway through, I promised if we made it out alive I’d do what I could to find her,” Gundlach explained. 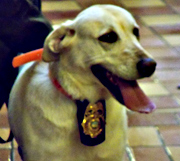 And that’s why he tried to adopt the four-and-half year-old purebred lab as soon as he got back from active duty. He calls her a special dog. “Well as any bomb dog handler knows anywhere, combat or not in combat, all that matters is that you don’t miss anything,” Gundlach says. “And she didn’t. Out of all the hundreds of searches, she didn’t miss anything. So that is all that matters.”

Gundlach was emotional, but told reporters he would not cry while in uniform. The Iowa Elks Association donated money for the Fire Marshal’s Office to buy a replacement dog.

Casey was promoted to special agent in the Fire Marshal’s office, and then Iowa Governor Terry Branstad immediately issued a proclamation retiring her from duty.

Gundlach is bringing Casey back to Madison where he plans to go to school in June to become a physical therapist.