You are here: Home / Crime / Courts / Girl who escaped kidnapper talks about ordeal 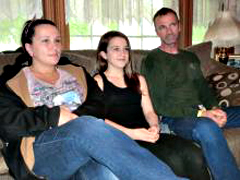 Dezirea Hughes and her family.

Dezirea  Hughes, a seventh-grader from Dayton has identified herself as the girl who escaped an abduction attempt Monday afternoon in which her friend Kathlynn Shepard was taken.

Shepard is still missing, and search crews continue to look for her in the surrounding area.

Hughes says 42-year-old Michael Klunder got them into his pickup truck Monday soon after they got off the school bus.
Audio:  Hughes :24

The girls were driven to a hog confinement building outside of town, where Hughes says Klunder zip-tied their hands and took Shepard away. That’s when Hughes ran.
Audio: Hughes :06

Hughes is unharmed other than some scratches on her arms and legs. She doesn’t believe what she did was anything special.
Audio:  Hughes :07

Jeanette Andrews, Hughes’ mother, talked about her daughter’s call after getting away.
Audio:  Andrews  :07

Klunder was found dead at another location and investigators say he took his own life. The search for Kathlynn Shepard continues, and officials say they will give an update with new information today 4 p.m.

Audio and photo for this story provided by Iowa Public Radio.