Investigators continue to search the area surrounding Dayton in central Iowa for Kathlynn Shepard, a 15-year-old abducted Monday as she walked home from the bus stop.

A twelve-year-old who was taken with her escaped shortly after the kidnapping and is, except for scratches on her arms and legs, unharmed.

The events have shaken the small town of less than 1,000 residents. A local church held a vigil last night for Kathlynn Shepard.

Her classmates remember her as kind, optimistic, and friendly. The superintendent of the school district, Launi Dane, said Shepard’s disappearance has taken a toll on the student body.

“Always has a smile on her face. She’s just a good student overall, she’s a good person,” Dane said.

Members of the community say they’re not sure when they’ll feel safe in Dayton again. The 12-year-old, named Dezeria, who escaped an abduction Monday afternoon said they were almost home when a man approached them in a red pick-up truck. 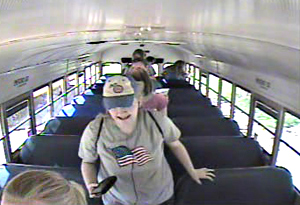 This is a photo of Kathlynn Shepard exiting her bus prior to her abduction Monday.

She said he offered to let the girls make money mowing lawns. They wanted to call their parents and he told them he would let them use his phone.

But the man took the girls to a hog confinement operation outside of town, where he zip-tied their hands and took Shepard away.

That’s when Dezeria ran and called authorities. The man who kidnapped the girls, 42-year-old Michael Klunder, was later found dead.  Investigators say he killed himself.

“We would like to thank everybody who took the time from their busy lives to help search for Kathlynn. To see so much love in our community and the surrounding areas is amazing. Thank you for all of your prayers and we hope to have Kathlynn home soon. We know that members of the public and media want to talk to us. Please understand, the idea of doing an interview is too overwhelming right now. Until Kathlynn is found, we’ll remain focused on our family and ask that any requests for information or comment be directed to the DCI.”