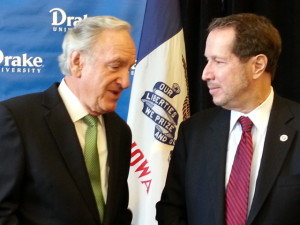 Iowa Senator Tom Harkin was at Drake University today to confirm a move many people had expected.

“I’m proud to announce today that it’s my intention that Drake University in Des Moines will be the repository for my historical papers and materials when I leave the Senate at the end of 2014,” Harkin said to an applause from a crowd gathered in Drake’s Cowles Library.

The Democrat had initially planned to house his documents from nearly four decades in Congress at Iowa State University, but the retiring senator became embroiled in a dispute with ISU officials over research restrictions.

“Things have a way of working out, don’t they? As I thought about leaving Washington last night, it was raining and pouring. I come here today and the sun is shining and it’s beautiful out. Clouds and rain do give way to sunshine and sometimes things just happen for the better,” Harkin said.

In April 2011, Harkin agreed to the creation of the Harkin Institute of Public Policy at ISU. But, this February, Harkin decided to back out of those plans because of the spat over restrictions on research.

“I have every reason to believe and expect that this (center at Drake) will be open to the public and it will done in a nonpartisan way. Researchers can come in and delve into all that stuff and who knows, down the road, I might look good in some things and I might look bad in some things. I don’t know,” Harkin said to laughter from the crowd.

Drake University President David Maxwell provided a short answer when asked by a reporter if there would be any research restrictions at the Harkin Institute.

“No,” Maxwell said as he grinned and then shook Harkin’s hand.

Maxwell said the center housing the senator’s materials will be called the Tom Harkin Institute for Public Policy and Citizen Engagement.

“The research, outreach, and programmatic activities of the institute will focus primarily on the topics and policy priorities that defined Senator Harkin’s career in public service,” Maxwell said.

Those policy priorities are expected to include agriculture, education, international development, and health and human services. Former Iowa State University President Gregory Geoffroy has agreed to serve as chair of the Harkin Institute’s National Advisory Council.

“Well, I didn’t think I’d ever be standing in front of a Drake University banner, but here I am,” Geoffroy said as he opened his remarks.

Geoffroy, who served as ISU president from 2001 to 2011, had originally worked with Harkin on plans to house the institute on the campus in Ames. Instead, he’ll lead the search for a director of the Harkin Institute at Drake.

“The goal will be to make this institute the preeminent public policy center in the United States. That’s what we need to be about,” Geoffroy said.

Harkin served in the U.S. House from 1975 to 1985. He’s been a U.S. Senator ever since. Harkin announced in January he plans to retire and won’t seek reelection in 2014. Drake President David Maxwell said the fundraising target for creating the Harkin Institute is $10 million. The roughly $3 million raised for the center at ISU will be transferred to Drake, Maxwell added. In addition, Maxwell said the names of donors to the institute will be made public.