You are here: Home / Human Interest / Rededication ceremony for Iowa Memorial in Vicksburg 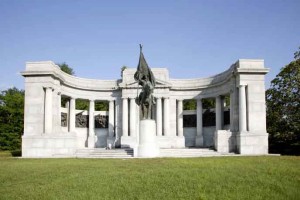 Ceremonies in Mississippi this weekend mark the 150th anniversary of the Battle of Vicksburg and a monument to Iowa soldiers who died there will be rededicated.

Iowa Governor Terry Branstad is on his way there this morning.

“That was a very key turning point in the Great Civil War,” Branstad said earlier this week. “It happened at almost the same time as Gettysburg was happening in the east…Up to that time it looked like the Confederacy could win that war. (The Battle of Vicksburg) around and it led to the Union victory and to the preservation of our nation as one nation.”

This afternoon starting at 4:30, Branstad will host an event at the Great Hope Manor in Vicksburg to welcome Iowans who’ve made the trip south to attend the weekend’s events. State Senator Dennis Black of Newton was involved in the effort to repair the Iowa monument at Vicksburg and he’ll be there, too, to speak at the re-dedication ceremony. The Sons of Union Veterans of the Civil War asked Black to estimate how much it would cost to repair the Iowa monument, which is huge — about the size of a modern-day McDonald’s restaurant.

“It was rapidly deteriorating,” Black said during an interview this week.

The State of Iowa paid to erect the monument at Vicksburg in 1906 and recently spent about $320,000 in state money to restore the monument building and its “bas-relief” statues.

“Metallic, full-size equestrian mounts and soldiers were vandalized. That had to be fixed,” Black said. “The tuck-pointing had been totally eliminated.”

Black concluded the stacked blocks of Mississippi limestone seemed to be held in place by gravity alone. Over 40 Iowa regiments — that’s likely more than 4000 soldiers — participated in the Battle of Vicksburg.

“In other words, a major portion of Iowa’s soldiers fought at Vicksburg,” Black said.

Black has written a book about 150 Iowans who have won the “Medal of Honor”– from the Civil War to present day. Eight Iowa soldiers were awarded the “Medal of Honor’ for their actions at Vicksburg. The family of one of those recipients has given Black their relative’s medal to take south, so it can be on display at the National Park Service Museum at Vicksburg.

The Rededication Ceremony for the Iowa Memorial at Vicksburg is to start at 10 a.m. Saturday. The governor will lay a wreath at the memorial, which is on the south loop of the Vicksburg National Military Park.