You are here: Home / Health / Medicine / Sleep sacks replace blankets for babies in most Iowa hospitals 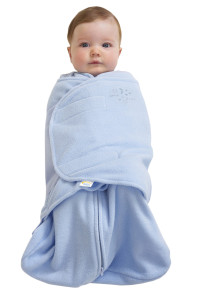 The way newborn babies are cared for in Iowa continues to evolve in the effort to make them safer. One of the changes involves using what’s called a “sleep sack” instead of a blanket to wrap up the babies. Michell Atlmaier works at Mercy Medical Center in Cedar Rapids.

“It’s kind of like a little snuggie for babies, it’s got a zipper that goes down and then two wings that actually wrap around the baby so they can be swaddled. And they’re lot safer than a loose blanket,” Altmaier says. Mercy partnered with a company called HALO that provides the sleep sacks to hospitals for free.

She says there are only eight hospitals in Iowa that are not using the sleep sacks. Altmaier says a safe sleep coalition was formed in Linn County after it was found that the county was the leader in early infant deaths from unsafe sleep practices statewide the last two years.

Going away from the traditional blankets was one of the changes suggested. “We’re actually following the guidelines from the American Academy of Pediatrics. And the research shows there is a chance and there is a risk that the blanket can come up to the baby’s face and could suffocate them,” according Altmaier.

Altmaier says giving the sleep sacks to parents of newborns sets a good example on how to take care of the babies. She says the sleep sack is just one of changes made to help promote safer sleep and prevent sudden infant death syndrome, or SIDS.

“That includes no more bumper pads, no stuffed animals in cribs, no fluffy blankets. And it’s really all about the A-B-C’s of safe sleep. Which is: alone, on their backs and in their cribs,” Altmaier explains. “So, we feel as a hospital when we model those safe sleep initiatives that parents and grandparents and anybody taking care of infants and newborns will be able to see that during their hospital stay and then model that behavior at home.”

Altmaier says they are reaching out to the eight hospitals that don’t use the sleep sacks in hopes they will adopt them. She says that would make Iowa the first state in the nation to fully adopt their use in all hospitals. The wearable blankets are recommended for at least the first year of life.

After that, children are old enough to pull blankets off their face or push themselves away from danger. The sleep sacks cost around $12.