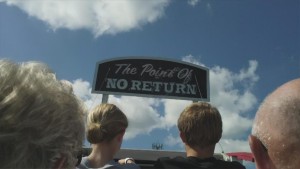 The Legend Roller Coaster’s “Point of No Return”

One of America’s oldest roller coasters, located in northwest Iowa, is back in business after a major rehabilitation project.

The Legend Roller Coaster at Arnolds Park amusement park carried its first thrill seekers in 1927. It’s believed to be the 13th oldest operating wooden roller coaster in the U.S.

Park spokesperson Di Lorenzon says crews spent eight months and $250,000 rehabbing the ride. About one-third of the 1,500 foot track was replaced. Further renovations to the old coaster will be done over the next three to five years.

Lorenzon says simply demolishing the Legend was not even considered. “Everybody who comes to the amusement park…some people want to ride the roller coaster, while others just want to watch it,” Lorenzon says. “Obviously, it is the main attraction in the park. We’re very proud of the Legend Roller Coaster and we want to make sure we’re doing everything to maintain and keep the Legend going.”

One of the improvements to the Legend includes new concrete footing below the coaster’s peak hill, dubbed “The Point of No Return.”