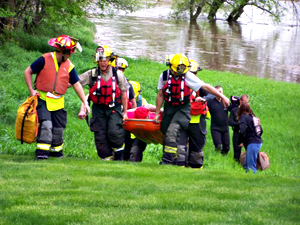 Ray Luecke was carried out of his flooded home by firefighters.

The Floyd River rose to nearly 24 feet which is about nine feet above flood stage before cresting.

The Plymouth County Dive Operations Team along with the Le Mars Fire Department were called to rescue an elderly couple after flood waters had penetrated their home, cutting them off from the main road.

Ray Luecke said the flood waters rose quickly around the home he shares with his wife Stephanie.

“This is its worst it’s been in 20 years. Our phones, land lines were cut off basically, and we had called some friends on the cellphones and the next thing we knew, the firemen and rescue team were down here to get us out,” Luecke said.

He said the water inundated their home. “When it moves, it move rapidly,” Luecke said. He says water from a nearby lake flooded in and caused a window in their basement to collapsed and water flooded the basement. The American Red Cross is helping the couple with a place to stay. 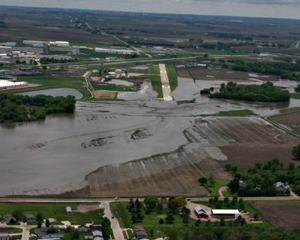 Flood water got through a levy and covered part of the runway at the airport in Le Mars.

City officials in Le Mars had to do some pumping after a berm at the airport was breached by floodwaters.

Nearly 1,000 feet of the airport’s runway was under water and more water was rushing toward the facilities.

Le Mars Fire Chief, Dave Schipper, explains how they got rid of the excess water.

“We ended up trenching along the tarmac. We actually brought a fire truck in and pumped water out of that area, so you’re talking roughly 126,000 gallons of water we moved in a three-hour time span or better,” Schipper said.

“We were able to fix the berm around the hangers with some dirt. We did get a little water in one of the hangers — nothing major at all — it was a miraculous thing we were able to save the airport and buildings.”

There’s also been flooding in nearby Cherokee County where officials said several of the county roads were either partially or completely submerged and several bridges sustained damage. The Little Sioux River at Cherokee crested at record levels on Monday.