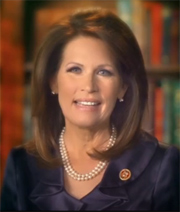 The Minnesotan who won the 2011 Iowa Republican Party Straw Poll, but finished last in the 2012 Iowa Caucuses is not seeking reelection to congress.

Michele Bachmann made the announcement in a video posted to her website early this morning.

Federal officials are reviewing Bachmann’s campaign spending and the state senator who served as Bachmann’s Iowa campaign chairman is the subject of an Iowa Senate Ethics Committee investigation.

A couple of former Bachmann staffers charge State Senator Kent Sorenson was paid to serve as campaign chairman, which would be a violation of state Senate Ethics rules. Sorenson strongly denies the charge. Bachmann denies any wrongdoing.

“It was clearly understood that compliance with all rules and regulations was an absolutely necessity for my presidential campaign,” she said in the video.