You are here: Home / Fires/Accidents/Disasters / Flooding continues to be an issue across the state 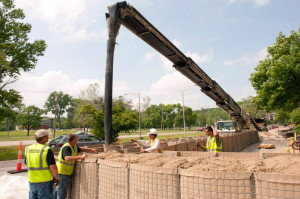 Workers fill flood barriers with sand at the University of Iowa.

With more rain in the forecast — flooding or the potential for flooding — continues to be an issue across the state.

In eastern Iowa, the University of Iowa is taking some of the most significant flood prevention measures since 2008 to protect the campus.

University of Iowa workers are sandbagging and constructing temporary flood barriers around some campus buildings.

Eighty-four students had to move out of Mayflower Residence Hall as a precaution.

Mayflower flooded in 2008 and U-I Director of Planning Design and Construction, Rod Lehnertz, says they have plans for a permanent flood wall to protect the Mayflower.

“We have received final FEMA approval of the Mayflower plan, we’ll go to the Board of Regents and bid a project that on a more permanent basis will protect that building from the impacts of floodwaters,” according to Lehnerts.

The students living in Mayflower Hall for summer classes were moved Tuesday to other student housing. Some of the flood waters have receded a bit in western Iowa, but Woodbury County Emergency Services director, Gary Brown, says the Floyd river remains high.

Governor Branstad issued disaster proclamations for 13 Iowa counties following recent storms and flooding. The counties are Buena Vista, Butler, Cherokee, Floyd, Ida, Iowa, Jasper, Mahaska, Marshall, Plymouth, Sioux, Tama and Wright. The proclamations allow state resources to be used to recover from the storms, including the removal of debris that may threaten public health and safety.

Woody Gottburg, KSCJ, Sioux City contributed to this story. Photo courtesy of the University of Iowa.