You are here: Home / News / Prospects for drying out don’t look good in the forecast 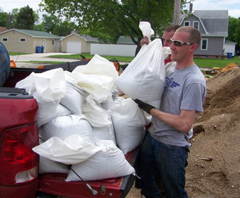 As many Iowans are seeing flooded streets, wet basements and farmland underwater, more heavy rain is expected to fall on much of Iowa later today and into Thursday.

Meteorologist Jim Lee, at the National Weather Service, says it’s -not- the forecast most people want to hear, as most areas of the state are already sopping.

“We’ve got a very active weather pattern in place where we have a large trough of low pressure across the western United States,” Lee says.

“What that’s doing is bringing a lot of moisture and storm systems over the Midwest in rapid succession. That’s why we’re getting rain almost every day.”

Some cities, like Marshalltown, are already ten inches of precipitation above normal for the month. Lee says severe weather is also a possibility for the next few days. “We’re expecting mostly hail and wind to be the primary threats,” Lee says.

“There is some change for tornadoes but the flooding may even be more of a concern than the severe weather. Most areas are already saturated and we’re looking at heavy rainfall in multiple rounds.”

Lee says rainfall amounts will vary with the latest round of storms. “Last night, we had thunderstorms over southern Iowa and some areas had between three and six inches of rain,” Lee says.

“It’s possible that any part of the state could experience that over the next couple of days, but we don’t expect everywhere in the state to see those kind of amounts.” Lee says we should see drier conditions by Saturday to start the month of June.