You are here: Home / News / Still-exploring Hatch would drop out if Vilsack jumps in (AUDIO) 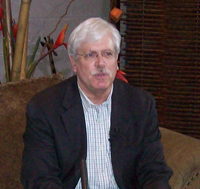 A state senator from central Iowa has set the goal of raising a million dollars by year’s end for a run for governor.

However, State Senator Jack Hatch, a Democrat from Des Moines, said if former Governors Tom Vilsack or Chet Culver jump in the race, he’d bow out.

“Secretary Vilsack is the 800 pound gorilla in this race. He is an accomplished governor, an extraordinarily accomplished secretary of agriculture. If he wants to come back I will defer to him and allow him to do it and get out of the race,” Hatch said.

“I’m not interested in taking on quality candidates that I think that have really proven to be a successful governor. That does for Governor Culver, too.”

Hatch formed an exploratory committee in April, the apparatus for his fundraising effort. Hatch, who is 63 years old, held a news conference in Des Moines this morning, with his wife, Sonja Roberts, by his side.

“This is something that I want to do. It’s something that Sonja’s supporting me in doing,” Hatch said. “She knows that this is not how she wanted to spend her early retirement years and so we’ve kind of come to a place with that.”

Hatch and his wife are property developers and Hatch says they have to “transition” the business if he does run for governor. Hatch says he’ll embark on a three-month “listening tour” of the state and make a final decision about the race at the end of this summer.

(A previous version of this story misspelled the name of Sonja Roberts.)