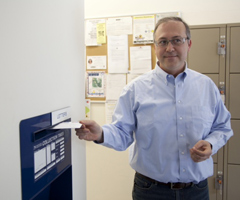 David Young files the paperwork to run for the U.S. Senate.

“My senate experience and working for Iowans can allow me to hit the ground running…I can be effective on getting things done, no matter which party’s in power,” Young said during a  telephone interview with Radio Iowa. “I’m an equal opportunity watchdog conservative.”

Senator Tom Harkin, a Democrat, announced in late January that he would not seek reelection in 2014.

Congressman Bruce Braley — a Democrat from Waterloo — launched his bid for the U.S. Senate in February, but Young is the first Republican to enter the race.

“When Senator Harkin announced his retirement I really didn’t think much of it in terms of getting into the race because I felt that there were some very formidable candidates — Latham, Reynolds, King, Northey, Schultz — who were probably going to take up this venture and it would have been foolish for me to even think about it,” Young said. “But as one by one kind of dropped out, I said to myself: ‘Here’s an opportunity to take your public service to another level.'”

Young, who is 45 years old, spent seven years working as Grassley’s chief of staff in Washington, D.C. Young recently quit that job, moved into a house in his hometown of Van Meter and he plans to run for the senate full-time.

“I”m conscious that I have to be my own man,” Young told Radio Iowa this evening. “A lot of people are going to probably see me out there being some kind of Chuck Grassley clone, but I’m David Young. He’s Chuck Grassley. We’re two different people and we don’t think the same on everything. I think I can be a real good check and balance against President Obama and the (Democrats) who control the senate because I really don’t like what’s going on and a lot of Iowans don’t like what’s going on either.”

Young’s family moved to Johnston when he was 15 and he graduated from Johnston High School. In 1991 Young graduated from Drake University. Young worked for two other Republican senators — Hank Brown of Colorado and Jim Bunning of Kentucky — before he landed a job in Grassley’s office.

“But I will say when I packed up my car and drove out to Washington, D.C. in 1993 the first door I banged on was Senator Grassley’s office because I really admire him,” Young said. “…There was no room in the inn, so to speak, so I found work elsewhere on Capitol Hill and then just seven years ago I was just really blessed to get a phone call from his chief of staff saying, ‘David, how would you like to come over and talk about being Senator Grassley’s chief of staff?'”

Young mailed in the paperwork for his own U.S. Senate campaign on Saturday. Young will face at least one competitor in next June’s primary. Matt Whitaker, a former U.S. Attorney and the Iowa Republican Party’s 2002 nominee for state treasurer, plans to formally announce his candidacy for the U.S. Senate Monday in Ankeny.