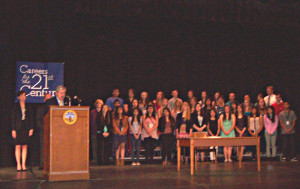 Governor Terry Branstad says the bill he signed a bill into law this morning will be “transformational” for Iowa schools.

With a few dozen students from Des Moines North High School standing behind him and a group of legislators and educators who worked on the bill standing to his left, Branstad signed the education reform package into law.

“I’m honored to have worked with all of you to reach this watershed moment,” Branstad said.

“It is a hard-earned accomplishment. Change is never easy, but it was particularly painful that we had to acknowledge that Iowa had slipped over the past two decades from a national leader in student achievement to middle of the pack.”

The law creates new “leadership pathways” for Iowa teachers, offering bonuses to talented teachers who agree to coach other teachers in their district. Schools that choose to participate will get about $310 per student to implement the law, which does call for raising beginning teacher salaries to $33,500 a year.

“This was a long journey, but I think it will be well worth it,” Branstad said.

The changes will be phased in over a five-year period. 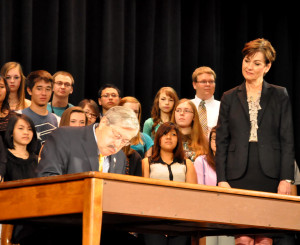 “These new reforms must be implemented thoughtfully and with fidelity,” Branstad said. “There are no shortcuts to world-class schools and we will need to build on these reforms in order to continually improve.”

The bill Branstad signed also provides Iowa’s public schools with something akin to a four percent increase in general state support for the academic year that begins this fall and another four percent boost in state support the following year.

Branstad urged Iowa taxpayers to hold him and local school officials “accountable” for implementing the law.

“We cannot afford to waste time or money,” Branstad said.

A new performance rating for Iowa’s public schools will be devised and the legislation also does away with reporting requirements for parents who home school their children, plus a parent will be allowed to teach up to four unrelated children under the new law.