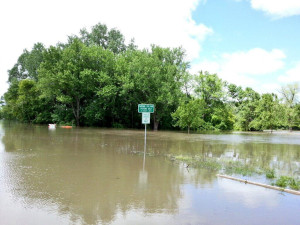 Crandic Park in Iowa City is full of flood water.

Iowa’s governor and lieutenant governor are touring flood-ravaged areas of the state this afternoon.

“You know, we’ve dealt with flooding before and I think Iowans have done a very good job,” Branstad said this morning during his weekly news conference.

“I have now declared 47 of the 99 counties (as) disaster because of flood-related problems.”

“Those areas were harder hit in 2008,” Branstad said. “Central Iowa was harder hit in ’93, but this has definitely been a challenging year and there are still farmers who have not been able to get their crops in the ground and we have significant areas that are going to require re-planting because of flood damage.”

The flooding is “managed better” this year in areas like Cedar Rapids and Iowa City than it was in 2008, according to Branstad.

“I think we’ve learned from every experience,” Branstad said. “Actually central Iowa was able to handle 2008 a lot better because of the experience we had in ’93. I think eastern Iowa, of course, was hit hard in 2008, but from what I understand a lot of preparation has gone on and a lot of effort.”

Plus, Branstad said the crests of the Cedar and Iowa Rivers aren’t as high as they were in 2008. Branstad scoffed at those who say this latest round of flooding is more evidence of climate change.

“Is it getting wetter or drier? I’d ask ’em,” Branstad told reporters, laughing. “That’s the point. Weather is always going to change and, you know, I’ve been governor during droughts and floods and we just went from a drought to a flood.”

There’s “no simple answer” to dealing with the weather, according to Branstad.

“You know those people that have lived longer than I have seen a lot more in terms of climate change and whatever,” Branstad said. “I think we have to be prepared and deal with that in the best way we can.”

The governor said he’s proud of the progress the state has made since 1993 in shoring up flood protection measures.

Audio of the governor’s weekly news conference is posted here.