You are here: Home / Sports / Waterloo Bucks work around floodwaters to get games in 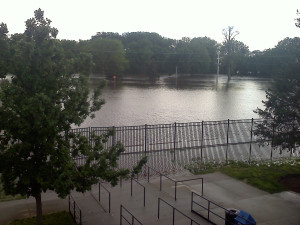 Floodwaters around Riverfront Stadium in Waterloo.

The Waterloo Bucks opened their 19th season of Northwoods League baseball last Thursday night under some unusual circumstances, playing in front of a small crowd in a stadium that’s surrounded by flood water.

The swollen Cedar River inundated the road and parking lot in front of Waterloo’s Riverfront Stadium early Thursday morning, cutting off access to the facility by vehicle.

Bucks General Manager Dan Corbin says he called the league to see if there was no access to the park if they should play. He says they advised him that if the field was still okay they should play.

Corbin says nearly 500 fans made their way to the game by parking on nearby residential streets and walking a few blocks on the flood levee that sits behind the stadium’s outfield wall.

“That’s about 450 more than I thought we would have…we were excited by the fan turnout,” Corbin says. 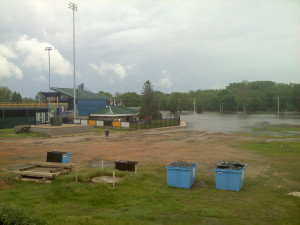 Corbin is happy the Bucks were able to play their games Thursday night, despite the inconvenience caused by the flooding. He says if you don’t get the games in then you end up playing more games in late June. The Bucks split their doubleheader with the St. Cloud Rox, winning the opener 9-2 and falling 12-2 in the nightcap.

The teams were forced to open the season with a doubleheader after Wednesday’s scheduled game in Waterloo was rained out. It marked the first time in team history that the Bucks were forced to postpone their home opener.