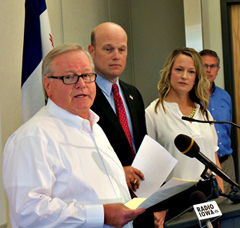 Whitaker made the announcement at Accumold Corporation, where he talked about his experience growing up in the state and his concern that his children and others won’t have the same opportunities he had.

“We have promised our next generation that they will have the American dream, but the only thing we seem to be handing them now is 50-thousand dollars in debt for every man, woman and child. That is why I am running,” Whitaker said.

“There is not doubt in my mind that Bruce Braley and Barack Obama will not make America strong. They will not have better days under their leadership.”

It was the first of two references to Congressman Bruce Braley, who is the only Democrat running for the Senate seat being left open in 2014 by the retirement of Senator Tom Harkin. Whitaker said the federal government is spying on its citizens, “stealing from our future” and taxing businesses more than is needed.

“That same federal government I described is threatening to grow even larger. Someone has to do something. And that is why I am here today taking a stand and that is why I want to be your next senator for the great state of Iowa,” Whitaker said.

Whitaker spoke with reporters after his announcement and was asked how he plans to cut federal spending. “Right now we need to look at the whole federal budget, the first place I would look is foreign aid,” according to Whitaker.

He said the U.S. is sending too much foreign aid to countries that don’t like us, and he said we need to look at the money sent to the United Nations when the body keeps passing resolutions that are not friendly to our country.

“Well, I think we have to convince a majority of Republicans to vote for me,” Whitaker replied. “We all know the game plan. It’s getting as many people as possible to say nice things, it’s getting the resources together and building a campaign that’s competitive, and I think we’ll be there.”

Whitaker played on the last Hawkeye football team to go to the Rose Bowl. He ran unsuccessfully for State Treasurer in 2002 and was later named a U.S. Attorney. Whitaker returned to private legal practice after leaving the U.S. Attorney’s Office.