You are here: Home / Education / Flood fight at U-I could cost $5-million 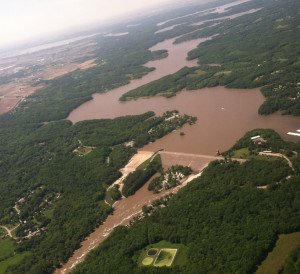 The spillway at the Coralville Reservoir.

Rain has returned to the state today, but it appears much of Iowa dodged a bullet with improving flood conditions following several days of dry weather.

Governor Terry Branstad on Monday took aerial and ground tours of some of the flooding in eastern Iowa. There’s no damage to buildings on the University of Iowa campus in Iowa City, but U-of-I President Sally Mason says flood mitigation efforts will be costly.

“We think the whole set up and take down will likely cost around five million dollars,” Mason said. Branstad said finding money to cut those costs should be a top goal.

The governor suggested lawmakers should consider setting aside more money in the state budget to better prepare for future disasters. Branstad also praised the efforts of local officials for the flood defenses that have been built since the devastating floods of 2008.

In Coralville, officials have invested more than $50 million in improvements. In Iowa City, Mayor Matt Hayek said roughly $88 million has been spent on permanent flood mitigation.

“We’re in a better position now because of steps we’ve taken in the last five years,” Hayek said. Governor Branstad’s tour on Monday included a stop in New Hartford in northeast Iowa.

Branstad said the flooding there was not as bad as residents feared. The governor has issued disaster proclamations for 47 of Iowa’s 99 counties, clearing the way for state resources in clean up efforts.