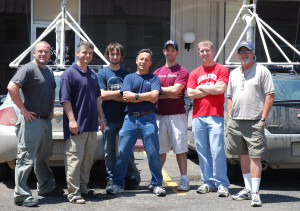 Storm chasers at Iowa State University are among those mourning the loss of Tim Samaras, a well-known tornado researcher who was killed along with 13 other people in the EF3 twister which struck near El Reno, Oklahoma last Friday night.

ISU meteorology professor Bill Gallus says Samaras was among the top scientists in the field of storm chasing and conducted tornado research with ISU graduate students several times over the past decade.

“We knew that he seemed to be the ‘tornado whisperer,'” Gallus told Radio Iowa.

“He was the one person who was successful at getting instruments into tornadoes. When we needed data to see how well our tornado simulator was producing tornadoes…to see if it was very realistic, we contacted Tim. That led to a very happy and good relationship for those 10 years.”

The 54-year-old Samaras was killed along with his 24-year-old son Paul and a colleague, 45-year-old Carl Young. Tim Samaras had a reputation for being safe, but somehow became trapped on a highway. “I know from our experiences at Iowa State that he was about as safety-minded as you could possibly be,” Gallus said.

There’s speculation that the vehicle the three men were in may’ve become stuck or quit running for some reason. Samaras never took unnecessary risks, according to Gallus.

“He frequently would abandon a chase, he would stop trying to hunt the data, if he thought there was any potential for danger,” Gallus said. “For instance, if a dirt road was the escape route, he would just stop and get away if rain was starting to fall because he knew the dirt road would get very slippery.”

Samaras and his storm chaser team produced material for the Discovery Channel, National Geographic, and severe weather conferences around the country. But, Gallus said Samaras wasn’t near as interested in the TV spotlight as he was in saving lives. Many of the 20 or so grad students who Samaras worked with at ISU hold Samaras in high regard, according to Gallus.

“I know a few of the students have posted tributes to Tim where they acknowledge he really changed the entire direction of their life,” Gallus said. “They decided to go on and pursue graduate degrees and decided to do research to try to better understand tornadoes and save lives just based on what Tim did and the way he lived his life.”