You are here: Home / Crime / Courts / Iowan testifies about IRS treatment of her nonprofit group 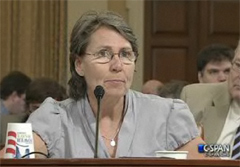 The head of a Cedar Rapids-based pro-life organization testified before a congressional committee Tuesday on how the IRS treated the group when it sought tax-exempt status.

Sue Martinek, president of the Coalition for Life of Iowa, spoke to the U.S. House Ways and Means Committee.

“I speak today so that what happened to us — the IRS’s demonstrated harassment, improper questions and intolerance toward our message — may not happen to others. The IRS’s questions centered on our education and potential political activities, our prayer groups and our signage,” Martinek said.

She testified that the group was formed in 2004 to provide “prayer and related activities about the sanctity of life.” In 2008 the group sought tax-empt status. Martinek said in May of 2009 an IRS agent she called Ms. Richards sent her a letter asking if the groups activities were religious in nature, and the group replied they were not and had said so in their application.

That prompted a phone call that sought a promise regarding an abortion provider. “In June of 2009 Ms. Richards told me verbally that we needed to send in a letter with the entire board’s signatures that under perjury of law we would not picket, protest or organize, picket and protest outside of Planned Parenthood. Upon receiving such a letter, she indicated the IRS would allow our application to go through,” Martinek said.

Coalition for Life then sent a letter in reply to the IRS asking them where it said in the law they could not picket or protest. Martinek said the IRS did not answer that letter, but instead followed with another written request for more information.

“Please explain how all of your activities — including the prayer meetings held outside Planned Parenthood — are considered educational as defined under 5-0-1-C-3. Organizations exempt under 5-0-1-C-3 may present opinions with scientific or medical facts,” Martinek read.

“Please explain in detail the activities at prayer meetings. Also, please provide the percentage that your organization

spends on prayer groups as compared to the other activities of the organization.” Martinek told the members of the committee that some boardmembers believed they should not sign or send the letter and should contact a lawyer who worked with such issues.

The coalition contacted such a lawyer. “With their help, and after we submitted a lengthy letter detailing the law and our constitutional rights, the IRS granted us tax-exmpt status,” Martinek said. She says the approval of the tax-exempt status came just one week after the lawyer’s letter was sent to the IRS.

The hearing is one of many looking into the actions of the IRS where they admittedly targeted conservative and religious groups for extra scrutiny. The acting commissioner of the IRS was forced to step down last month as more information on the targeting of the groups was released.