You are here: Home / Agriculture / Tom Vilsack will not run for governor in 2014 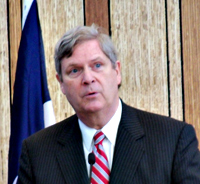 A spokesman for former Iowa Governor Tom Vilsack says Vilsack considered running for governor in 2014, but has decided against it.

Vilsack has been serving as the nation’s secretary of agriculture since January of 2009 and plans to remain in that job.

This morning’s announcement may clear the field for a handful of other Democrats who’ve been mulling the idea of running for governor, but were reluctant to start a campaign with the potential of Vilsack entering the race and easily securing the Democratic Party’s 2014 nomination for governor.

Sue Dvorksy, a former Iowa Democratic Party chairwoman, says Vilsack would have been the “instant frontrunner” if he had jumped in the race.

“He’s run for governor twice and won. He was an incredibly effective governor,” Dvorsky says. “You know there’s a lot of residual good feeling about that, so clearly that would have been the case.”

But Dvorsky’s not surprised by Vilsack’s decision. 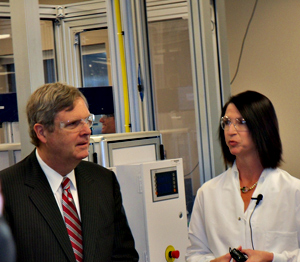 Ag Secretary Tom Vilsack speaks with a researcher during a recent visit to the Dupont Pioneer lab in Johnston.

“I was never one of the people who believed he was going to run,” Dvorsky says. “He is remarkably effective as secretary of agriculture. He is a lynchpin member of that cabinet.”

“I know a lot of Iowans and a lot of Iowa Democrats have encouraged Governor Vilsack to return to Iowa and run for office,” Shannahan says. “I’m not surprised that he decided to decline at this point. He’s really enjoying his position as secretary for the United States Department of Agriculture and I think he wants to finish that work before he moves to some other opportunity.”

Sally Pederson was Vilsack’s lieutenant governor/running mate in 1998 and 2002.

“Obviously I’d love to see Tom Vilsack as our governor again, but I think he’s serving Iowa and our country in an important position as secretary of agriculture and I think continuing in that job is probably the right decision for everyone involved,” Pederson says.

Vilsack’s wife, Christie, ran for congress in 2012 and lost to Republican Steve King. She’s now employed by the U.S. Agency for International Development as a senior advisor on international education. Christie Vilsack was a teacher for 20 years and she has described this new post as a “dream job.”

Last week state Senator Jack Hatch said if Vilsack ran for governor, that would prompt Hatch to end his exploratory campaign. Representative Tyler Olson, a Democrat from Cedar Rapids who is chairman of the Iowa Democratic Party, has also been considering a bid for governor in 2014. or a run for Iowa’s first congressional district seat. Senate Democratic Leader Mike Gronstal of Council Bluffs last week said he would decide “by the end of the summer” whether he’ll run for governor.