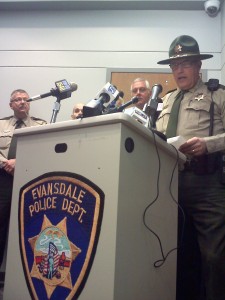 While investigators continue to search for clues in the disappearance of 15-year-old Kathlynn Shepard in north-central Iowa, authorities working another abduction case near Waterloo say they still aren’t sure if the two cases are connected.

It’s been nearly 11 months since Elizabeth Collins and Lyric Cook-Morrissey disappeared while riding their bicycles in Evansdale.

The cousins went missing on July 13th and their bodies were found by hunters in a wooded area of Bremer County on December 5th. Now, investigators are wondering if Michael Klunder had anything to do with their disappearance.

He says investigators are still sifting through information and don’t yet know if the two cases are connected. Abben says Klunder isn’t the sole focus of the Evansdale investigation. He says other leads continue to be uncovered and investigators continue to follow-up on all information concerning the disappearance and deaths of the cousins.