You are here: Home / Business / Robot cuts cost of inspecting inside of water towers 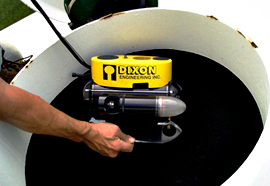 Inspecting the inside of a water tower may not sound very exotic, but the procedure is going high tech in an eastern Iowa city.

When a water tower’s interior paint is nearing the end of its warranty, a specially-trained crew needs to scale the 172-feet up the side of the tank, go inside and inspect it for flaking and rust spots.

“The previous method took five to seven days,” Murphy says. “It involved climbing up to the top of the tank, putting a raft in the tank and loading people onto that raft and then slowly letting the water out of the tank so people on the raft could review the inside of the tank as they went down.”

The whole two-million gallon tank had to be drained, disinfected, refilled and tested. Now, Murphy says they’ve hired a team to use an ROV — or a remote-operated vehicle.

She says, “It’s basically a little submarine that is remote-controlled and has a video camera and a light on it so they can capture the inside of the tank.” The robot is disinfected before being dropped in the tank, so there’s no need to drain all the water. The whole process using the ROV takes less than 24 hours, not a week, and the $3,000 price is half what the raft method cost.

“Before, they needed several people on the raft and specialized equipment,” Murphy says. “Here, they still have that specialized equipment but it’s all robotic and you basically have someone on top of the tank to lower the little submarine in and someone at the bottom with the remote control taking video.”

The ROV will get its first use in Cedar Rapids Tuesday at the Wilson Avenue water tank. The team that will run the ROV is with Dixon Engineering, based in Michigan.