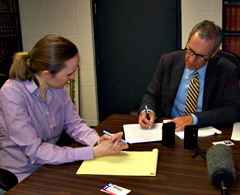 Karger fills out complaint, with Megan Tooker of the Iowa Ethics & Campaign Disclosure Board.

A retired Republican political consultant from California was in Des Moines today to file an ethics complaint against a national group that helped bankroll campaigns against four Iowa Supreme Court justices who were up for retention.

The justices were targeted in the 2010 and 2012 elections because they joined the court’s unanimous 2009 ruling that paved the way for gay marriage in Iowa.

Fred Karger, a gay rights activist, alleges the National Organization for Marriage has violated Iowa law by failing to disclose its donors.

Karger’s complaint charges that the National Organization for Marriage should have filed disclosure forms with the State of Iowa revealing the name of each donor who contributed more than $50.

“This has kind of been the cause I’ve taken up,” Karger said. “I probably should have taken up golf or something, but I decided to get active in this political arena for this side and I’ve always with candidates I’ve worked with believed in truth and transparency and I think it’s important that if people are going to participate in the process, they need to abide by state and federal laws and this National Organization for Marriage does not agree with that position.”

On Thursday Karger plans to be in Washington, D.C. to file a complaint with the Federal Election Commission. Karger charges the National Organization for Marriage “conspired” to put up a million dollars for the endorsement conservative activist Bob Vander Plaats gave Republican presidential candidate Rick Santorum a few weeks before the 2012 Iowa Caucuses.

“The more I’ve been digging on that, the more evidence there is that there was money exchanged. I’m going to be releasing a statement tomorrow and some campaign reports that show the National Organization for Marriage paid $80,000 that they reported between their two organizations to Mr. Vander Plaats Family Leader and to his 501c3. I contend that was done in 2011, that that was the down payment of what was more money to come,” Karger said today. “…It’s highly unlikely that Bob Vander Plaats gave his endorsement for free to Rick Santorum.”

However, Karger alleges Santorum was a beneficiary of part of that million dollars, as many of the “major donors” to the National Organization for Marriage gave money to the political action committee Vander Plaats established to back Santorum’s candidacy. Karger told reporters in Des Moines that he will present documents to federal regulators that show the National Organization for Marriage and Rick Santorum “have been joined at the hip” for many years.

“There’s so many connections that I am confident the Federal Election (Commission) with its abilities will do a lot of digging and discourage this because this is one of the problems we have with these elections and nothing legal under the united case,” Karger said. “This is, again, done in the dark of night and in secret and I think I may have busted them.”

If the Iowa Ethics and Campaign Disclosure Board finds Karger’s complaint about the way the National Organization for Marriage participated in 2010 and 2012 Iowa judicial retention elections valid, the top penalty the board could levy is a $2000 civil penalty per violation. Karger acknowledged the other complaint he’ll file with federal officials on Thursday faces a tough road as the Federal Election Commission is made up of an equal number of Republicans and Democrats, so it’s likely one Republican would have to join with the Democrats to advance an investigation.

“I just think if Mr. Santorum is running again, which he clearly is, then he owes an explanation,” Karger said. “I think we need an explanation on this. If there were any illegal activities, we need to find out.”

“In considering the source (a  notorious attention-seeker) and motive of the false allegation, we won’t dignify it with any comment, except that the public record is clear, and we will respond if election officials request additional clarification,” Hurley said.