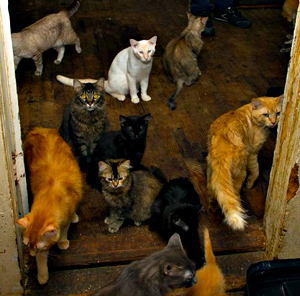 Cats found inside a Southeast Iowa home by the Animal Rescue League of Iowa.

Many animal shelters in Iowa are at or near capacity and desperately in need of both donations and people willing to adopt cats, dogs and other pets.

Scott Wilson, with the Animal Rescue League of Iowa, says the Des Moines shelter is especially full after ARL staff rescued over 50 cats and kittens from a single home in southeast Iowa this week.

“Generally, late spring and early summer are the highest population times for any shelter in the state of Iowa and we’re no exception,” Wilson says.

No charges are being filed in connection with the “hoarding” incident in southeast Iowa and Wilson is not naming the city or even the county where the rescue occurred.

The cats were well fed and are in good health, but there was a lack of spaying and neutering with the felines. This time of year is typically a busy one for animal shelters for a couple of reasons, primarily because cats and dogs are having litters. 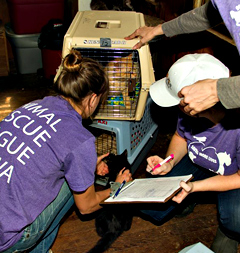 In addition, Wilson says a lot of people tend to move into new homes or apartments in the spring and they either can’t take their pet or just leave the animal behind.

If Iowans want to help animal shelters, but are unable to adopt a pet, they’re encouraged to donate cat or dog food, blankets, towels, or cash.

“There are a lot of things that the general public can’t buy, such as medicines…and monetary donations go a long way to letting us tailer what our animal needs are,” Wilson said.

The Animal Rescue League of Iowa is running a special cat adoption promotion, now through Sunday. All cat and dog adoptions at ARL facilities in the Des Moines metro are just $25. The usual fee is $100.

The adoption fee include spaying or neutering, vaccinations, and a microchip ID.