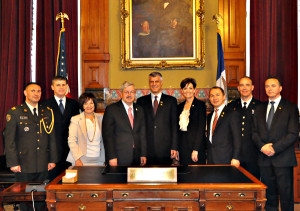 Iowa’s governor and lieutenant governor met this morning in Des Moines with the prime minister of Kosovo.

More than 700 Iowa National Guard troops have performed peacekeeping missions in Kosovo since 2003.

“They’re only about 11 years old and Iowa National Guard played a key role in helping them in their early days.”

In 2011, the Iowa National Guard has a formal relationship with Kosovo through the “State Partnership Program” to help Kosovo improve its security as well as grow its economy and education system.

“We hope that over time we can see Kosovo grow and prosper and increase trade with other countries,” Branstad says. “And I want to see Iowa play a role by being a good friend and a great ally.”

Governor Branstad will travel to Kosovo in early July. He’ll sign a separate sister-state agreement with the Republic of Kosovo.

“A wonderful opportunity for Iowa to build a long-standing relationship with this new country that is a wonderful friend of the United States,” Branstad says.

Branstad’s July trip to Europe will also include visits with business prospects i Germany and Switzerland as well as a stop in the Veneto region of Italy. Veneto is one of Iowa’s current eight sister-states.