You are here: Home / Human Interest / These fathers and sons can reminisce about flying on Father’s Day

Father’s Day this weekend will bring fathers and sons together. Radio Iowa’s Dar Danielson met four men who have a few high-speed, high-flying adventures they can talk about as they celebrate.  Audio: Danielson report 1:13. 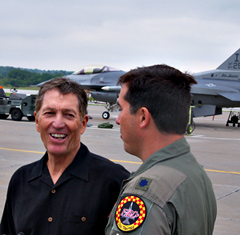 Keith and Travis Acheson at the 132nd Fighter Wing in Des Moines.

The Iowa Air National Guard’s 132nd Fighter Wing based in Des Moines has five sets of fathers and sons who both have become pilots.

Seventy-two-year-old Keith Acheson of West Des Moines flew several different jets from 1968 through 1991 He says it was a surprise when his son Travis first told him he wanted to do the same around the time his son was a sophomore in college.

But his son, 44-year-old Travis Acheson, says he had been aware of what his dad did. He says the idea of following his dad into flying probably came as he worked at a golf course near the airport.

“I can remember when he flew the F-100 and the A-7. And then the A-7 when I’m mowing greens and working at Willow Creek, I can remember him and his friends flying over the golf course on takeoff,” Acheson recalls.

“So you just look up there and as you start aspiring to what you might want to be when you grow up — that obviously seemed pretty logical that I might get involved in that same kind of career path.”

Travis Acheson is proud of the flight time he and his dad have wracked up as he says they’ve flown for a combined 50 years, while the unit has been flying for a total of about 70 years. 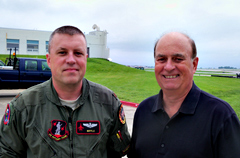 Doug Pierce of Norwalk retired as a Brigadier General in 2008, but before he flew F-16’s and was able to join his son Todd in the air.

Pierce says the hard part was his son qualifying to fly, as there are so few spots open for those who want to be pilots.

“I was elated he wanted to do it. He wanted to be a pilot, but there was no guarantee that it would happen,” Pierce says. He says there are about 35 pilots out of the 1,000 positions in the unit.

“Now when I was out here full time, we’d have about 150 applicants per year for one, maybe two slots. I think that number’s maybe diminished now for the number that apply, but it’s very competitive to get one of the pilot training slots allocated to a guard unit,” Pierce says.

The father and son flew together for 10 months before the father retired, and he says it was “very unique” to be able to fly with his son. Todd Pierce was in the guard for three years before becoming a pilot and says being able to fly with his dad was a great experience,  that was “pretty cool.”

Pierce is a Major and Acheson a Lieutenant Colonel and the squadron commander. Both plan to stay on and fly the unmanned M-Q-9 Reapers once the F-16’s are phased out this fall.